The Glovemaker
by Ann Weisgarber 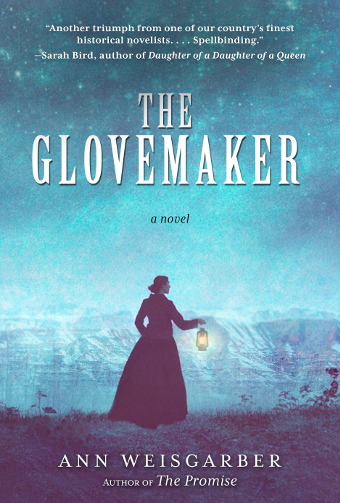 Book synopsis: In the wilds of the Utah Territory, in 1888, thirty-seven-year-old Deborah Tyler waits for her husband, Samuel, to return home from his travels as a wheelwright. It is now the depths of winter, Samuel is weeks overdue, and Deborah is getting worried.

Deborah lives in Junction, a tiny town of seven Mormon families scattered along the floor of a canyon, and she earns her living by tending orchards and making work gloves. Isolated by the red-rock cliffs that surround the town, she and her neighbors live apart from the outside world, even regarded with suspicion by the Mormon faithful who question the depth of their belief.

When a desperate stranger who is pursued by a Federal Marshal shows up on her doorstep, it sets in motion a chain of events that will turn her life upside down. When the Marshal is critically injured, Deborah and her husband’s best friend, Nels Anderson, are faced with life and death decisions that question their faith, humanity, and both of their futures.

Ann is also author of “The Promise,” set in Galveston prior to the 1900 storm, and “The Personal History of Rachel DuPree.” She was nominated for the UK’s Orange Prize, the Orange Award for New Writers, and the Walter Scott Prize for Historical Fiction. In the United States, she won the Stephen Turner Award for New Fiction and the Langum Prize for American Historical Fiction. She was shortlisted for the Ohioana Book Award and was a Barnes and Noble Discover New Writer. Ann was inducted into the Texas Institute of Letters. She lives in Galveston.