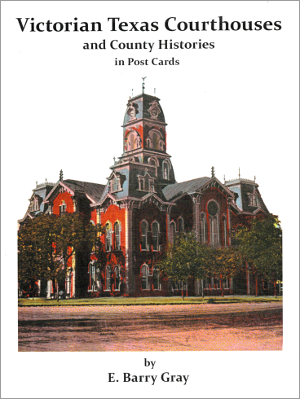 The Victorian Courthouses of Texas have been considered the architectural treasures of the state. Although the buildings share many characteristics, such as the use of wrought iron, stained-glass, towers, turrets, and gingerbread, the Victorian Era represents not one, but many different styles. This was the golden age of courthouse design when almost every county in Texas built at least one of the imposing and ornate structures, and because of fires, sometimes two or three.

The Victorian styles fit perfectly with the idea of what a temple of justice should say about a county’s people and their values, illustrating in stone and glass the importance of government and law in society. While most of these great buildings are now gone, the beauty of their designs has been preserved in the hand-tinted post cards that were so popular in those days.

Victorian Texas Courthouses and County Histories in Post Cards seeks to preserve the memory of this architectural tradition through the gathering of over one hundred vintage picture post cards. His previous book, Greetings from Galveston, explores island history also using post cards for illustrations.

E. Barry Gray is a 5th generation Texan whose family was among the earliest settlers of East Texas. His great-great grandfather was Josephus S. Ervine, the youngest man to have fought in the Battle of San Jacinto. This family heritage accounts for his lifelong love of Texas history. He is a graduate of the University of Texas at Austin and taught chemistry and physics in Texas public schools for thirty four years.