Galveston Bookshop will host a book signing on Saturday, November 16th, 2019, 2:00-4:00 pm with returning Texas writer E. R. Bills and his book covering the disputed suspension in 1969 of 10 college students after they staged a Vietnam war protest. 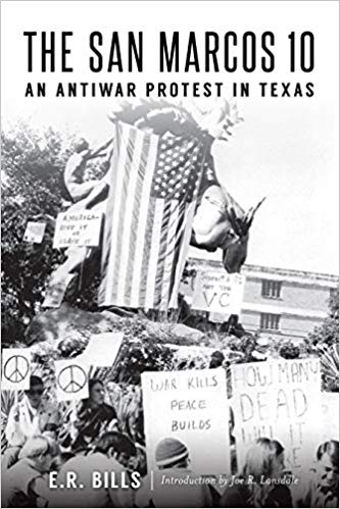 On November 13, 1969, ten students at Texas State University were suspended for participating in a peaceful protest against the Vietnam War. They had kept vigil in front of the Huntington Mustangs, bearing signs that read, “Vietnam Is an Edsel” and “44,000 U.S. Dead, For What?” while an increasingly hostile anti-protest crowd chanted, “Love it or leave it!” and “Let’s string ’em up!” It was a day after news of the My Lai massacre broke. Part of a coordinated, nationwide Vietnam Moratorium effort that confounded and infuriated the Nixon White House, the “San Marcos 10” challenged their suspension, taking their case all the way to the United States Supreme Court. Author E.R. Bills offers this fascinating glimpse into the 1960s antiwar movement in Texas, the extraordinary measures to quell it and the broader social activism in which it participated.

E. R. Bills received a BA in Journalism from Texas State University and does freelance writing for publications around the state. He is an author, screenwriter and free-lance journalist from Aledo, TX. He is the author of Texas Obscurities: Stories of the Peculiar, Exceptional and Nefarious, and The 1910 Slocum Massacre: An Act of Genocide in East Texas.