Bartee Haile joins us once again, this time with a book focusing on some of the great Lone Star characters that got passed over in the history books. 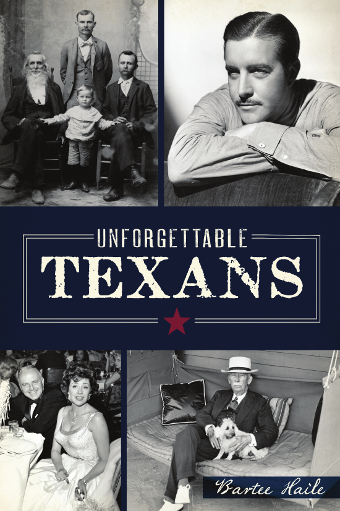 History books burst at the seams with stories about Houston, Travis, Crockett and other icons of Texas history. Yet many of the Lone Star State’s fascinating figures–well known in life but forgotten in death–remain obscure by omission. This scintillating company includes a World War I spy who became a movie star, the first gringo matador, a West Texas tent showman and the husband-and-wife trick-shot act that amazed audiences for forty years. Some characters cut across the common narrative, like the admiral whose advice might have prevented the attack on Pearl Harbor, the one and only Republican congressman in the first half of the twentieth century, the Klansman Texans elected to the U.S. Senate and the businessman who wrote the longest English-language novel in complete secrecy. Popular columnist and author Bartee Haile brings to life some of the most intriguing Texans who ever slipped through the cracks of history.

Bartee Haile has written “This Week in Texas History” for small newspapers throughout Texas since 1983. Three of his other books will be available at the event: Murder Most Texan, covering high profile Lone Star homicides; Texas Depression-era Desperadoes, a look at the outlaws of that period (especially Bonnie and Clyde); and Texas Boomtowns, stories of the towns which sprang up amid the oil craze that swept the state in the early 1900s.