Judge Ed Butler joins us Saturday with his history covering Barnardo de Galvez and the Spanish assistance to the Colonies in the American Revolution. 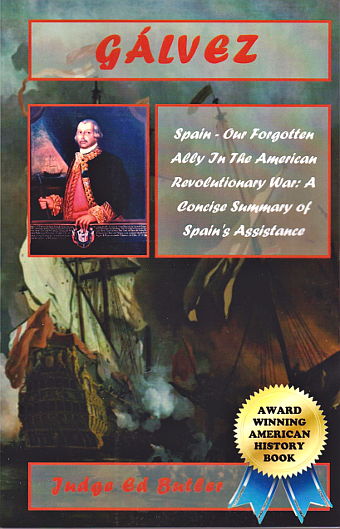 In 2010, Judge Ed Butler led a group of 35 members of the National Society Sons of the American Revolution on a tour of Spain. During their visit to Madrid, then Crown Prince Felipe granted the SAR members a private audience at Zarzuela Palace. During that audience King Felipe asked judge Butler to write a book about Bernardo de Galvez and Spain’s assistance to the U.S. during the American Revolutionary War. The result is a 360 page book with 214 footnotes, 37 pages of appendices, and containing the names of hundreds of Spanish patriots. With this documentation of Spain’s contribution to the our country’s war for independence, a notable gap in the history of the American Revolution is filled.

Judge Butler is an honor graduate of Vanderbilt University School of Law, where he was selected as a member of Phi Delta Phi Honorary Legal Fraternity. He has served as judge at the city, county, state, and federal levels, retiring as a Federal Administrative Law Judge. He is a retired Naval Intelligence Commander and the recipient on the National SAR Society’s “Best Published History Article”, and the Award of the Dallas Genealogy Society’s “Best Family History Book for 1997.”