Henry Sampson and the Great Galveston Storm
by William Merrell

We will host a book signing on Saturday, October 24th from 2:00 to 4:00 PM with William Merrell and his new historical novel set at the time of the 1900 Storm. 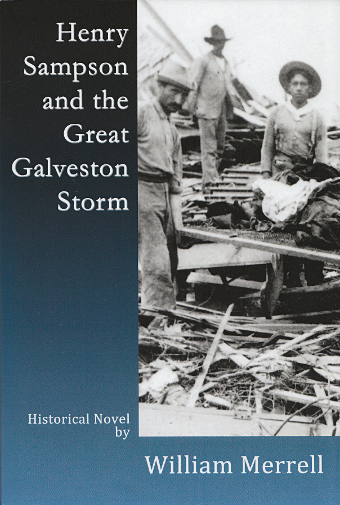 Henry Sampson and the Great Galveston Storm is a historical novel set in Galveston, Texas in the year 1900. Sampson is an ambitious young businessman looking to make his fortune in the city known as the Wall Street of the South. From his office overlooking the Strand, Sampson enjoys a clear view of the busy port which was then controlled by the Galveston Wharves Company nicknamed the Octopus of the Gulf. By way of a romantic interest he becomes involved in a lady’s scheme to recover a cache of Jean Lafitte’s hidden treasure and encounters a host of historical locals along the way, including Jack Johnson, George Sealy and Isaac Cline among others, all in the week prior to the island’s devastating encounter with a hurricane of unimaginable power.

Bill Merrell holds the George P. Mitchell chair in marine sciences at Texas A&M University at Galveston. He studies hurricanes and is the originator of the coastal barrier system dubbed “Ike Dike.”