Andrew W. Hall will join us for a book signing on Saturday with his newest local history book, Civil War Blockade Running on the Texas Coast. 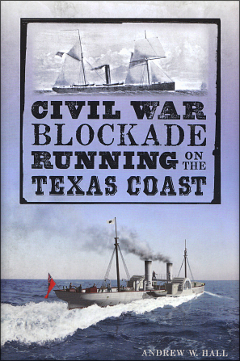 In the last months of the American Civil War, the upper Texas coast became a hive of blockade running. Though Texas was often considered an isolated backwater in the conflict, the Union’s pervasive and systematic seizure of Southern ports left Galveston as one of the only strongholds of foreign imports in the anemic supply chain to embattled Confederate forces. Long, fast steamships ran in and out of the city’s port almost every week, bound to and from Cuba.

This short volume discusses blockade-running in the western Gulf of Mexico, with particular emphasis on the last year of the war, when Galveston became the last remaining port in Confederate hands in the region. Running the blockade under sail, life aboard the Union ships of the blockade, and the lure of prize money are also discussed. The book includes an epilogue that discusses some of the archaeological work done on runners over the last 40 years.

Andrew Hall is a native of the Texas Gulf Coast and a long-time researcher and author, specializing in local maritime and Civil War history. His previous book, The Galveston-Houston Packet focused on the steamship trade operating on Buffalo Bayou in the mid-Nineteenth Century.