In the Heart of Texas…

Galveston Bookshop will host a book signing on Saturday, April 6th, 2:00-4:00 p.m. for returning author Barbara Ortwein with her book, “In the Heart of Texas But Not Yet at Home,” the second book in her series of historical novels covering the immigration of the Germans to Texas. 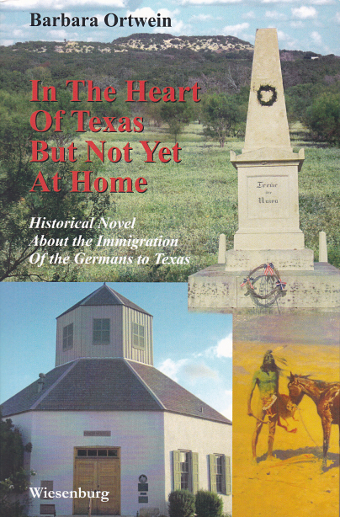 In search of political and person freedom, self-determination, and their own land, thousands of Germans started to settle in the wilderness of Southwest Texas in the mid-1800s. Among these settlers are the Hessians Karl Engelbach and his son Johann, forced to flee Germany in 1844.

Though the work is difficult, the Germans do well at first. Aided by an unlikely alliance with the Comanches, they manage to tame parts of the Texas Hill Country. Their cities of Fredericksburg, New Braunfels, Boerne and Comfort become centers of civilization and culture in the former wilderness. After secession of Texas and the onset of the Civil War, they were in danger of losing all they had worked for. Most of the settlers were Union supporters, a position which would initiate serious difficulties for their community.

The thrilling continuation of her first novel, “Between worlds, Never to Return,” this second installment continues the story of the Engelbachs and the integration of the Germans in Texas, and the great conflict that arose for them during the American Civil War.