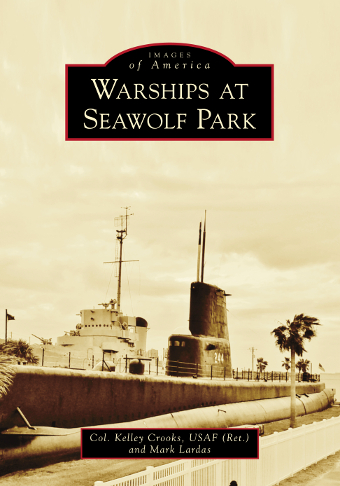 Galveston Bookshop will host a book signing on Saturday, December 8th, 3:00-5:00 p.m. with Col. Kelley Crooks USAF (Ret.), and Mark Lardas and their new book about the historic ships at Seawolf Park on Pelican Island.

The American Undersea Warfare Center at Seawolf Park in Galveston, Texas is home to two World War II warships, the USS Cavalla, an attack submarine; and the destroyer-escort USS Stewart.

The summer of 1944 was the turning point of World War II. Operation Overlord, the landing at Normandy, had begun, and naval battles raged on in the Pacific. In the midst of the war, the attack submarine USS Cavalla, out on its initial patrol near the Philippines, became the only submarine to gain revenge on a Japanese carrier that attacked Pearl Harbor. The USS Stewart protected Allied convoys from German U-boat wolf packs patrolling the North Atlantic.

For nearly 75 years, stories abound about these warships that served to preserve our liberty in World War II, and now serve as the centerpieces of a busy history center at Seawolf Park. The book features lots of photographs, documentation, and historical detail.