Home › Announcments › The Downfall of Galveston’s May Walker Burleson

The Downfall of Galveston’s May Walker Burleson 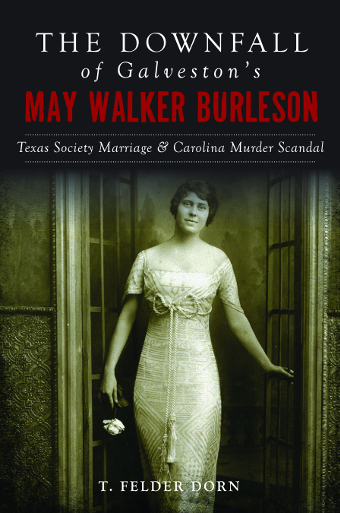 In 1900, May Walker Burleson was 12 years old and living with her family in Galveston when the hurricane struck that year. She and her family survived the disaster, her good fortune marking the beginning of what would become a remarkable life in many ways.

Jennie May Walker Burleson was envied for having everything a woman of her time could want–the privileged upbringing, the dazzling good looks, the dashing war hero husband. She was admired for demonstrating that a woman could want more, from the front of the 1913 Woman Suffrage Procession to the bottom of a Mesoamerican archaeological dig. But as she stood over the body of her husband’s second wife, gun in hand, society’s envy and admiration quickly hardened into pity and scorn. T. Felder Dorn examines the complicated trajectory of her life as socialite, suffragist and shooter.

T. Felder Dorn graduated from Duke University in 1954 with a BS in chemistry, followed by a PhD in 1958 from the University of Washington. He served on the chemistry faculty at the University of the South in Sewanee, TN, in 1958–69 and then served four years on the program staff of the College Board in New York. From 1973 to 1991, he held positions at Kean University in Union, NJ, serving as associate dean, dean and vice-president for academic affairs. He retired in 2001. Felder Dorn and his wife, Sara Ruth, have resided in Millburn, New Jersey, since 1973 with their three children and three grandchildren.