Gina Hooten Popp joins us again with her latest book in the Winds of Change series, Lucky’s Way. 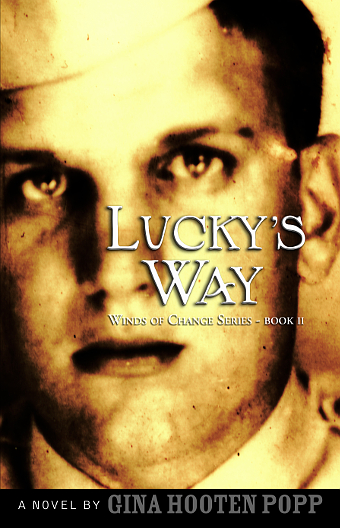 And young U.S. fighter pilot Lucky McLaren is headed home to West Texas on an extended reprieve from battle. But destiny has other plans for him as Italian suffragette Antonia (who is being sought by the police for a crime she did not commit) seeks refuge in the same train car he is traveling on, changing not only his homeward bound direction, but the course of both of their lives. Can he help her right the wrong she is being accused of? And can the two of them find a way to overcome the physical and emotional scars and secrets of their past to make a future together? Filled with history and passion, Lucky’s Way is an inspirational tale of healing and redemption—a stirring testament to the power of belief and self-discovery, to hopes lost and found again.

In The Storm After, the first book in the series, four survivors of the 1900 Galveston Hurricane come together to form a family of sorts as they recover from inconceivable loss. Lucky’s Way follows the same cast of characters (and a few new ones) all the way from war-torn France to the Gulf Coast of Texas. The books can each be read as stand-alone novels, or together as a serial historical saga.

A native Texan, award-winning author Gina Hooten Popp (pronounced “Pope”) was born in Greenville and now lives in Dallas with her husband and son.