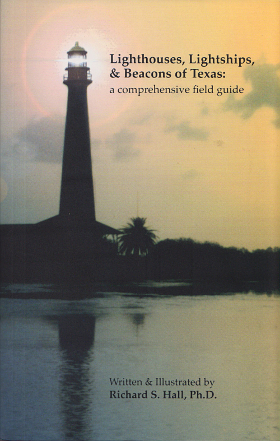 Galveston Bookshop will host a book signing with Richard S. Hall and his comprehensive field guide to Texas lighthouses, Lighthouses, Lightships, & Beacons of Texas, published in 2013.

Unique among lighthouse books, Dr. Hall’s book focuses on the physical and geographical features of the lighthouses and includes over 350 black and white images including site plans, elevations of the towers and dwellings, and navigational charts. Each lighthouse in Texas from 1854 on has been thoroughly researched and presented with drawings, maps and photographs. In addition to the book, some of Dr. Hall’s pencil renderings of select lighthouses (including nearby Bolivar Lighthouse) will be available as limited edition art prints.

Richard S. Hall is a native Texan who spent most of his early life in Houston where he developed a keen interest in the natural treasures of the Gulf Coast. He is an accomplished natural scientist, illustrator, and educator with a special interest in Texas History. He has won numerous awards in photography, illustration, fine art, and film.

Lighthouses, Lightships, & Beacons of Texas received the Independent Publishers’ Bronze award in 2014 for best regional non-fiction in the South.

The book signing will be held at the store, 317 23rd street in Downtown Galveston.